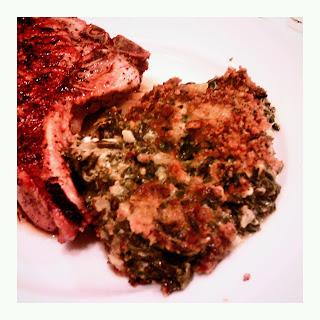 The casserole is the Eisenhower era's most persistent contribution to our culinary technology. If it involves more than a little bit of family--at births, deaths, Thanksgivings, Xmases--it involves casserole. But just because the casserole is traditionally built around the kinds of ingredients you'd find in the backyard fallout shelter doesn't mean it is a genre without merit, a point Faith Durand makes convincingly in her cookbook Not Your Mother's Casseroles, and over at Apartment Therapy's cooking unit, The Kitchn. I definitely lifted some ideas here from her way of doing things, but I thought the lack of spinach casserole was a glaring omission from that book.


Anyway, inspired by this season of bland foods and Pyrex, and in possession of several cubic feet of baby spinach, I set out to make a spinach casserole that would get grandma's version banished from the holiday table. (A metaphorical grandma, since I never met either of mine, and in any case neither one probably got much fancier than a dash of salt for the potatoes and a Yorkshire pud on holidays.) The traditional fallout shelter way to do things is to thaw some blocks of frozen spinach, mix in canned condensed cream of mushroom soup and a block of cream cheese, season it if you're lucky, glop the whole thing in a 9x13" baking dish, and top it with canned fried onions for textural contrast and a last, desperate, ultimately futile bid for flavor. Bake 45 mins at 350.


Okay, so the bones of the recipe are there: spinach, mushroomy salty creamy stuff, cheesy creamy stuff, crispiness on top, and flavor hopefully somewhere in the middle. This was my vow: for my version, everything must be fresh. I would open no can, I would thaw no vegetable, nothing would crunch that I hadn't crunchified myself. And god would smile upon it, and it would fucking rule.


First, the spinach
I don't know exactly how much I started with. It was a big bag from Stanley's, like 18" square and four inches thick. Took up a whole shelf in the fridge, which is really why I decided to make this. Two pounds, maybe? I diced and sweated a couple of small onions in butter, then a shallot, then a bunch of garlic and some vermouth. While that reduced to almost nothing, I coarsely chopped the spinach and added it in shifts until the whole mess cooked down to about two quarts, then drained it. (I probably should have drained it a little better than I did, but I was excited.) 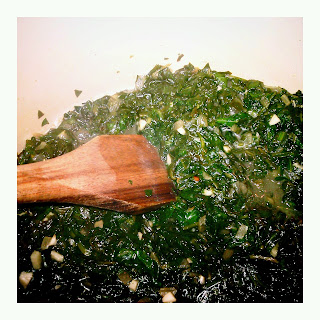 Most nights this would have been a fine place to stop. But this wasn't just any night. I put it aside while this next business happened.


Chanterelle cream
Next thing was to figure out some analogue to the vegetable casserole's essential precursor, Campbell's canned condensed Cream of Mushroom soup. I had some beautiful chanterelles on hand, so I started there. This is what two ounces or so looks like. 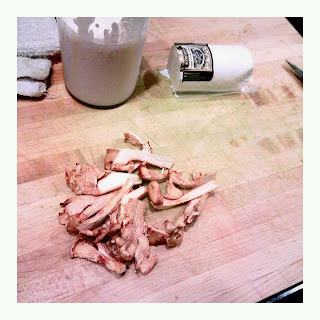 Chopped them, sauteed them with some coarse chopped garlic over fairly low heat in butter and olive oil until I got a nice fragrance going. Then I added 10 oz of buttermilk (for tangy jab) and 2 oz of heavy cream (for butterfat bodyblow) and let it cook down a bit. Then all of this went into the spinach mix, now over low heat again, along with 5-6 oz--half of one of the big logs--of room temperature chèvre (for cheesy goatiness and accent-gravitude), and was stirred till it all combined. Hard to keep the passive voice going for so long but it seems to have to have been done.


I think chanterelles might actually have been a little milder than what I had in mind. The pieces tasted delicious when you got one, but didn't let out as much mushroomy flavor into the cream as I'd hoped. Something a little darker and more robust, like porcini or shiitake, possibly reconstituted dried ones, might have worked a little better. Here's how things looked in the pan, post mushroom cream, pre chèvre. 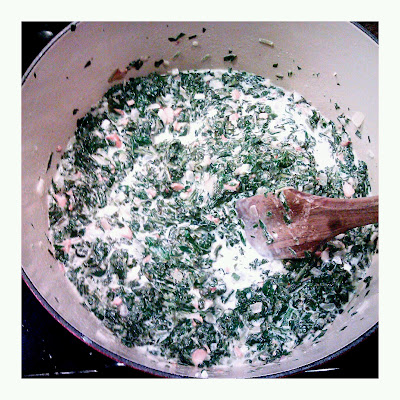 (Wow these photos suck. That's creaminess, not glare.) Next, of course, glop it into Pyrex and bake it at 350 for 30 mins or so. While that's happening, process ye some bread crumbs out of a couple of stale slices of bread you thought to cut up and leave sitting out for a few hours. Toast about 1/2c of them in a pan with a little butter and some salt and pepper, and then when the casserole is done with its first 30 minutes, sprinkle the bread crumbs on top and cook it for about 15 more. I gauged ultimate doneness based on how the liquid looked from the side. When the spinach seemed to be wading in a tidal zone, rather than drowning in cream up to its neck, I called it ready. 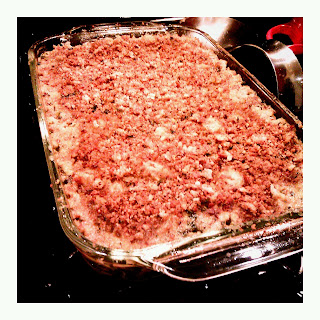 With a nice pork chop, it was grand, and technically this is a vegetarian dish that you can feel just fine about. I really should learn to take some pictures that make things look as good as they taste, because this was one of the best things I've made in a long time.


11/29/11 update: Made it again, using 6 oz of portabellas and a couple of tablespoons of flour in the cream, and a little better draining of the spinach, and sourdough for the breadcrumbs, and that fixed what little was wrong with it first time around.
Labels: fresh casserole holidays spinach vegetarian side dishes